Carp Solutions, LLC contracted through the Scott Watershed Management Organization (Scott WMO), has completed implanting radio tags in 20 carp in Cedar Lake in September. Here is important information so you know what to look for if you catch or find a carp that may be tagged:

First, please notify Melissa Bokman at the Scott WMO so they can retrieve the tag if the fish is not alive or seriously injured to be re-implanted in another fish. They want to have an accurate account of the carp population in the lake &amp; successful study to develop the proper management strategies for Cedar Lake.

Here is how to identify a radio-tagged carp: Look at the undersides of the carp for an incision that is stitched with dark blue stitching. You will find a silver metal antenna extending out of the fish at an angle near the incision (see photos for example). Photos include the finished sewn incision with the antenna coming out of the side and the other is a little zoomed out picture to give perspective of where you should look for the antenna/incision.

What to do if you catch a radio-tagged carp in Cedar Lake: Please release the fish back into the lake if uninjured; If the fish is alive but injured pretty badly (floating near shore struggling to survive or just not acting healthy), contact Melissa at the Scott WMO 1-952-496-8887; If the carp is dead, hold on to the fish and call Melissa at the Scott WMO 1-952-496-8887 to come pick up. 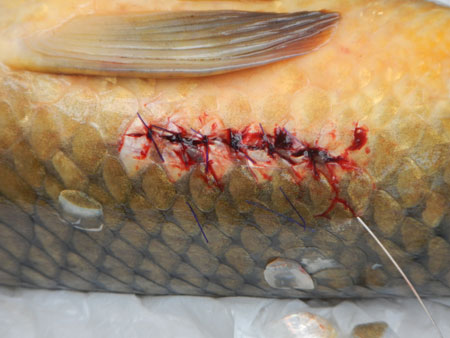 As part of the lake management plan, the CLID has approached the control of carp in Cedar Lake through two primary methods: Netting and Bow fishing. Netting is regulated heavily by the MN DNR through licensed commercial fishermen that are assigned certain zones or areas within the state. Bow fishing is a recreational activity that many archers participate in, adapting their equipment and boats to maximize the take of rough fish.

In 2014, the CLID worked to bring in the commercial fisherman assigned to the area encompassing Cedar Lake, but he was unable (and has been unable on other occasions) to locate schools of carp. He felt that netting Cedar Lake would not be productive and declined netting. He was willing to check back in the future.

In an effort to seek other tactics or methodology, the CLID learned that telemetry is often used to locate large schools of carp. Transmitters are planted in fish during the open water season and when the carp winter, they are located in tight knit schools and netted through the ice by commercial fishermen that have the proper gear. There is a high cost associated with this method and the CLID will continue to evaluate if this method is viable and/or if there are partnering opportunities to implement this method.

The 2nd annual Carp Kabob bow fishing tournament was successfully held. The event was made possible by a watershed stewards grant and filled quickly with a 10 boat limit. Each boat was comprised of 2-3 team members that took the water from 10pm-9am. The fishing cooled down on tournament day with 52 fish taken, the largest between 24-27.5 lbs. Reports during the ‘pre fishing’ time period were hot. Follow up surveys to participants indicated the impressive impact that the tournament has on the carp population due to the collective effect of pre-fishing. Three of the teams visited the lake 6 or more times leading up to the tournament. Teams reported taking hundreds of fish and weight estimates exceeded 4,000 lbs. of carp removal.

In October, the County initiated an electrofishing study conducted by St. Mary’s University. The goal was to get a better grasp on the carp population in Cedar, Arctic and Spring Lakes. Cedar lake carp density was 7.71 carp/ha and represented by mature adult fish. Conditions, equipment and lake size contributed to a biased estimate, not necessarily representative of the true population size. St. Mary’s cited the inability to survey a significant portion of the shoreline, potentially resulting in an underestimate of the population.

In conclusion, the CLID has concluded that carp control (with the present carp population) in the form of commercial netting may not be feasible without the effective use of telemetry. The expense of such a study provides no guarantee for carp removal, but can be extremely successful if wintering schools are successfully located. It’s a method to consider in the future or if other funding sources become available.

Currently, the CLID’s most effective method to continue with is the carp bow fishing tournament. It’s effective given the impact of pre fishing and is manageable by the Board of Directors. Residents have been supportive of this event and we look to continue the success of the event.

There were two avenues to be utilized in 2013 to aide in management of the carp in Cedar Lake: carp seining by a designated commercial fisherman and a bow fishing tournament sponsored by a grant from Scott Watershed Management Organization (SWMO).

Throughout 2012 and 2013, the board has asked Mr. Geyer to seine during the winter months or net carp in the fall. For various reasons he did not accomplish either and was unwilling to allow another commercial fisherman to perform those tasks except for the fall of 2012. Therefore, no carp were seined or netted in 2013. In February and March 2013, Mr. Geyer completed sonar testing to locate where the carp may be schooling for seining. He found some carp but not any large school of them which would allow for successful seining. He indicated however that he would be seining for them in the spring after the ice was out and before opening fishing weekend but this was not accomplished. Once sport fishing is allowed, carp seining isn’t allowed again until fall since it interferes with recreational fishing. Mr. Geyer missed this window of opportunity. He said he would attempt to seine for them in the fall but changed his mind in September and never signed the necessary DNR paperwork to allow another commercial fisherman to do so. He indicated he would search for the carp using sonar once the lake froze over. He apparently was not able to locate any large schools so he did not seine for them in winter of 2013-2014.

In March 2013, the board learned that the application for the SWMO’s Stewards Grant of $2,000 was awarded to the CLID for the purpose of funding a carp bow fishing tournament which fit the criteria of the grant’s objectives of funding projects for improving water quality of county lakes/streams. Brad Eller of the board volunteered to head up this project.

The first annual Carp Kabob bow fishing tournament was held on May 17-18, 2013 during an unseasonably cold and stormy night/morning. There was a limit of 8 boats for the tournament and that limit was filled quickly after the tournament was announced. Brad reported that 40 carp were harvested with the five largest fish ranging from 21-31 pounds each. All fish were taken by bow and arrow. The grant money was used for prize money for the most carp harvested by the top 5 teams and for the largest carp caught (31.4 pounds). For more details, see Carp Kabob Tournament link on the Home Page. Given the tough weather conditions that the teams faced throughout the night and the difficulty in locating inactive carp, the event was considered a success in removing some very large carp from the lake. Another tournament is planned for 2014.

The 2012 test seining of the south end of Cedar Lake has been completed. The results show a large population of carp averaging 30 to 40 Lbs per fish. The Lake was seined in two areas to determine the structure of the lake bottom in order to see if a winter seine would be feasible. The fist seine yielded about 1000 Lbs of carp with no other species noted; the second seine yielded about 250 lbs of carp, a few Muskies, Walleyes, and Bass. The results were favorable and indicate that a winter seine could be done.

The processes involved two boats laying out 3000 ft of net, from the lake inlet at Cedar Lake Farm then circling north and back to the west shoreline about a quarter mile and the pulling the net back to its start. This first net yielded 1000 lbs. of carp with no bottom interference. The second pull was from the same starting point to the east with 3000 feet of net circling about a quarter mile north and pulling back to the start yielding about 250 lbs of carp. There was interference with three 30-foot trees which were pulled in.

This seine was very successful in mapping the lake bottom and clearing debris, setting the stage for what should be a successful winter seine when the carp are schooled and in the best position for harvesting. The fishing was done by two Minnesota commercial fisherman: Reidemann Fisheries and Seemann Fisheries.

The seining and the carp management are budgeted as a cost share program with the county (Scott Watershed Management Organization) and an important part of the lake management plan. We are posting a few pictures and will keep you updated as the program proceeds. We believe the winter seine will be something to observe and we hope to get advance notice of those dates so we can post them on our website.

The CLID and Scott Water Management Organization are in the process of contracting with a licensed Minnesota commercial fisherman for the harvesting of carp late this fall and winter as part of the overall CLID lake management plan.

The common carp is a non-native invasive aquatic species that severely impacts water quality in shallow lakes and wetlands. Their feeding habits disrupt shallow rooted plants, muddying the water and releasing phosphorus from lake sediment, increasing algae blooms. Proper carp management has been shown to improve water quality and promote plant growth which will be essential in re-establishing native plants in Cedar Lake.